Alvar Aalto is Finland’s world-renowned father of bent wood furniture. His designs are a superb example of the uncompromising spirit that has managed to overcome the barriers of style and taste, fashion and social class. Many of his creations are in greater demand now than ever before. Born in 1998 in Kuortane, Finland, Aalto studied architecture at the Technical University of Helsinki. He initially worked as an exhibition designer and later turned to architecture and furniture design. Aalto established an experimental plywood workshop in Turku, were he worked with bent wood and glue. He used this new technique for his world famous furniture in the project of the Paimio Sanatorium from 1932. In 1935, Aalto founded the furniture design company Artek, were he continued to develop his laminated wood furniture, some of which are still being produced today. In the same year he patented a cantilevered chair support made of wood. This became the basis of his trademark chair designs. Aalto’s designs for his building projects and major exhibitions were the creative platform for him to develop his pioneering classics. Particularly important to his career were the London exhibition in 1933, Paris 1937 and the World Fair in New York in 1939. Alvar Aalto dies 1976 and leaves a legacy of numerous design classics, all carrying the blond and Nordic spirit inspired by the Finnish nature. 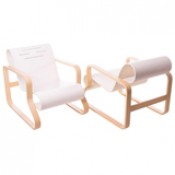 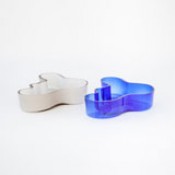 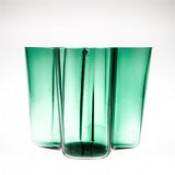